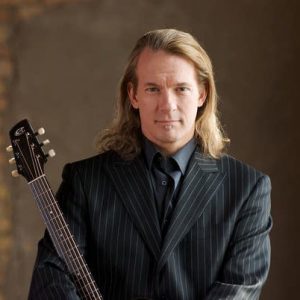 Billy McLaughlin is recognized internationally as a world-class guitarist, composer and inspirational performer who has appeared on Billboard’s TopTen Chart. Previously signed to Virgin Records’ Narada label, McLaughlin has 14 CD releases, 3 National Campus Entertainer of the Year Awards*, 5 Minnesota Music Awards and his decades of national concert touring earned him the Hall of Fame Achievement Award*.

But in 1999 McLaughlin vanished from sight as his career crumbled due to a little-known neuro-muscular disorder called Focal Dystonia. After suffering several years without a cure, he embarked on an unlikely attempt to regain his career by re-learning his instrument left-handed. His remarkable comeback is captured in the documentary film Changing Keys (airing on PBS 2010) and a concert film called Coming Back Alive featuring McLaughlin with string orchestra and a reunion of his longtime rock band.

Now serving as Ambassador for Awareness for the Dystonia Medical Research Foundation, McLaughlin is the winner of the 2010 Public Leadership in Neurology Award** whose previous winners include Paul Allen, Julie Andrews, Leon Fleischer and Michael J. Fox.

McLaughlin has resumed an international schedule of concert appearances and keynote speaking. He resides in his home state of Minnesota where he is proudly raising two boys.

Rethinking Impossible: “Completely Impossible” Today is “Totally Do-able” Tomorrow.
Billy is the walking, talking, music-making example of the “impossible” giving way to persistence, innovation, discipline and creativity. Unwilling to lose his award-winning career to an incurable disorder, in this program Billy shares how achieving the impossible simply requires:

Silence is Not an Option: Making Noise is Making Change
What does a beginner musician do before they start making music? They start making noise. Why do they make noise? Because they want to make music but are not able to…yet! This program explores how silence is not an option when you want to achieve your goals and dreams. Learn from Billy’s comeback after being silenced by a mysterious incurable disorder and how we can all:

What Now?: Innovating at Core Levels Takes Courage and Persistence!
What do you do when…

This program gives easy to remember steps to help both individuals and companies move past the pain of change into the joy of innovation.

Repeated thanks for all you added to TEDxAtlanta…everyone [was] amazed by your talent and inspired by your story... - Tod Martin, President & Chief Executive, Unboundary

WOW is all I can say…thank you so much for adding the most amazing element to our Annual Sales Meeting. I cannot begin to describe the impact you made on 250+people…This is my 9th year at LSI and [this] was our best meeting ever. - Jane Jenewein, Sales Strategic Alliances Manager, Landscape Structures Inc.

The show blew everyone away! - Gary Christenson, M.D., Artistic Director, Center for Art and Medicine, University of Minnesota

Billy McLaughlin made the night magical for our guests and his efforts did not go unnoticed - so I am not surprised at the outpouring of support he received at the conclusion of his performance! He is such a ray of light and hope for so many and I am glad that he is sharing his message through his gift of music and the warm way in which he interacts with his audiences. He illuminates joy and that helps people keep the faith! - Koleen M. Roach, Director, Meetings & Conference Management, Securian Financial Group

Your performance at the Guthrie Theater’s Society for the Arts in Healthcare event was spectacular. Thank you so much for sharing your talents with us. You created a fabulous dynamic of respect, peace and love with the audience, and I have never experienced anything quite like it. Thank you for all you did to make the event such a grand success. - Louise Chalfant, Director of Education, Guthrie Theater