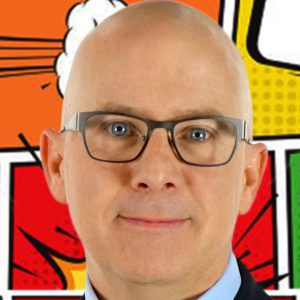 Like you, happiness expert, speaker and author Brad Montgomery believes:

Brad combines all of these ideas — and a ton more — into everything he does on stage. He’s a very funny guy with some very relevant ideas about how to improve ourselves and those people around us. And…he’s funny. (Yeah, we said this twice.)

But he’s also one of the funniest business speakers out there. His keynotes and “Expanded Keynotes” (which is a fancy way to say “Longer keynotes that include some experiential, hands-on learning experiences” … which is a fancy way to say “Audience Participation On Steroids That Helps People Remember and Learn”) use an out-of-the-box blend of humor, wisdom, audience participation, music, and even confetti in order to keep the learning on high.

Your people will love Brad Montgomery. And they’ll love YOU for finding him.

When MillerCoors had to knuckle down and manage a software initiative, they called on Brad. After his program, they referred to Brad as “The best 90 minute investment ever in our people.”

Organizations who partnered with Brad to help their people become more creative, innovative and productive through greater happiness include Verizon Wireless, Microsoft, Kaiser Permanente, John Deere Landscapes (who called Brad’s programs “Transformational”), the FBI (yes that FBI), the CIA, (yes that CIA) and the IRS — where Brad withheld 30% of his best ideas.

Brad is guaranteed. He has his Certified Speaking Professional (which is the highest EARNED honor a speaker can get.) And better yet, he’s been inducted into the CPAE Speakers Hall of Fame … Which is a really big deal in Speaker-Land. (No, you won’t find it on the map, but you get the idea.)

Looking for a speaker with ideas that will help your people thrive? Looking for a speaker who engages, connects and keeps their attention because they love him so much? How about somebody who’s funny? Ready to set the tone and the mood for your entire meeting? Then you’re ready for Brad Montgomery.

Laugh-O-Nomics™ Connecting Happiness At Work To Bottom Line Success
Brad’s most requested program. In this totally interactive, hilarious and highly engaging keynote Brad teaches that happiness is up to us. Furthermore, the payoff for happiness has a huge impact on our bottom line results. Ready to fire your people up, give them some science that can change themselves AND their teams and make them WANT to make a difference? Then this keynote is for you.

Motivation: Embrace Your Awesomeness
It’s simple. Brad believes that everybody needs to be told that they are awesome. They can make a difference. They can take responsibility. They can take ownership. And they should do all of these things and more.

Brad believes that we generally underestimate our influence. So in this motivational keynote he reminds people how much power and influence they have, and it encourages them to motivate and build up those around them. He inspires them to get up and take action. To make a difference. To see that they have a purpose in life.

Supported with humor, stories, the craziest use of PowerPoint you've ever seen, music and even confetti Brad takes on motivating your team to be their best to a new (and very funny) level.

Need more Brad? Ask us about using him as an emcee or even after-dinner entertainer in order to maximize your Brad-ROI.