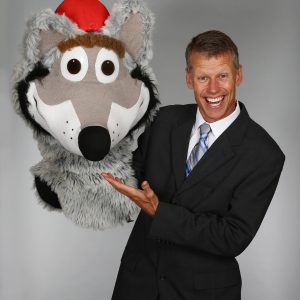 Dan Meers goes to work each day like many other men, dressed in a suit. The only difference is that instead of wearing a tie with his suit, Dan wears a tail. You see, Dan is a professional mascot. Dan began his career in 1986 at the University of Missouri – Columbia. Dressed as the school mascot, Truman Tiger, it didn’t take long for Dan to establish himself as one of the top college mascots in the nation. After finishing second in 1988, Dan was selected the nation’s #1 college mascot at the 1989 National Collegiate Mascot Championships. As graduation approached, Dan began to receive offers to use his talents at the professional level. After graduating with honors, Dan decided to trade in his tiger stripes for bird feathers and began his professional career as Fredbird, the mascot for the St. Louis Cardinals baseball team. Although many thought Dan's “bird legs” were a perfect match for his costume in St. Louis, Dan stayed only a short time. He was offered a job in professional football and decided to exchange his bird suit to become a wolf.

Today Dan is widely known as KC Wolf, the official mascot of the Kansas City Chiefs. He travels throughout the United States and the world entertaining thousands of people both in and out of costume. Dan is in high demand not only as a mascot but also as a humorous and motivational speaker to audiences of all ages. His enthusiasm, optimism and love for life are contagious and makes Dan an inspiration to all those he meets.

After listening to Dan, you realize that what makes him so truly special is his genuine desire to motivate others to enjoy life as much as he does. The constant smile he wears comes from within. The humorous message he shares has encouraged thousands to strive for the best in life and enjoy it each and every step along the way.

COURAGEOUS LEADERSHIP – LIVING A LIFE OF INFLUENCE
On November 23, 2013, Dan Meers came within inches of losing his life while practicing a bungee jump and zip line stunt at Arrowhead Stadium… home of the Kansas City Chiefs. What Dan anticipated being the thrill of a lifetime ended up being the spill of a lifetime. The stunt went terribly wrong and Dan plummeted 75 feet before crashing into the stadium seats. Miraculously Dan survived. He spent 9 days in the hospital and got some really big scars. Dan smiles when he says, “Scars are just Tattoos that come with a Cool Story”. During this powerful presentation Dan shares his incredible story and the important lessons that he learned during his long road to recovery about leadership and about life.

TAKE OFF THE MASK - IS YOUR LIFE STORY WORTH TELLING?
It’s been said that if you ask a man his occupation you will find out how he pays his bills, but if you ask a man his preoccupation then you will discover the passion of his life. Dan Meers has a rather unique occupation. For over 25 years he has paid his bills by working as “KC Wolf” the mascot of the Kansas City Chiefs. However, Dan’s preoccupation, what he is truly passionate about is encouraging others to strive for the best in life and to enjoy it each and every step along the way. Dan believes that your life is like a Coin. You can spend it anyway you wish but you will only get to spend it one time, so spend it wisely. During this presentation Dan shares some of the valuable lessons he’s learned during his long career as a professional mascot. Whether at home, work or in the community, Dan challenges his audience to live each day to the fullest by wisely investing their lives and not just spending them.

A SHEEP IN WOLVES CLOTHING
Dan also offers a variety of programs for churches and faith based organizations. These programs center around Dan’s faith and the importance it plays in his life. Dan strongly believes that “God didn’t put us on earth to make a living, He put us here to make an impact.” These programs are designed to challenge and encourage others to put their faith into action.

Dan served as the men’s pastor at his church for two years and he has a passion for men’s ministry. He enjoys speaking at men’s conferences and retreats where he encourages and challenges men to be godly leaders in their homes and communities.

Dan’s wife Cam is a Marriage and Family therapist and together they enjoy speaking at retreats and conferences aimed at strengthening marriages and families.
ABC of Success

During his mascot career Dan has presented over 3,000 school assemblies and youth programs to students of all ages. Dan does these programs for one simple reason – He loves young people! Dan has three children of his own and he knows the importance of good role models in the community. His programs are designed to “Edutain” (Educate and Entertain). Dan believes that learning should be fun and he offers programs on a variety of topics including:

“Dan has had a profound impact on the Chiefs’ Kingdom because of his character, humility and focus on others. With endless energy, an infectious positive spirit and a gift for entertaining, Dan’s message of character and encouragement has made KC Wolf much more than a mascot.” — Clark Hunt, Kansas City Chiefs owner

“For those who have watched Dan perform as KC Wolf, it’s easy to see that he is quite a character. For those of us who know the man inside the costume, it is obvious he is also a man of character. Hearing his incredible story will not only give you an appreciation for Dan Meers the mascot but, more importantly, for Dan Meers, the man behind the mask.” — Tony Dungy, former NFL head coach

“Dan Meers was an outstanding speaker for our annual conference. His message was highly entertaining with a strong and resonant message. He is an individual with great heart, genuineness, and authenticity and his message, and delivery resonated extremely well with our audience. I would definitely recommend him to other organizations.” - Midwest Energy Association

“An amazing, inspirational speaker that made our group laugh, cry and reflect. I would recommend Dan Meers hands down! ” — New Horizon Academy

My leaders cannot stop talking about the powerful keynote you delivered at our Leadership Development Institute yesterday. The impact you made will last forever! Thank you. - HCA Midwest Healthcare