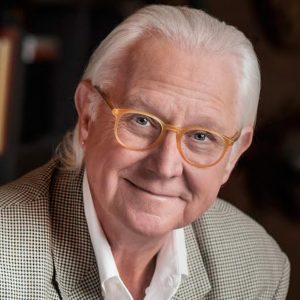 Don Shelby is widely considered the most decorated and honored local television journalist in the country. He has won three national Emmys, the Columbia-duPont, the Scripps-Howard, the National Distinguished Service Award from the Society of Professional Journalists and he has been honored twice with the Pulitzer Prize of broadcasting, the George Foster Peabody.

Don continues his 45 year career in reporting after retiring from daily journalism in November of 2010. He continues to write for MinnPost, on the online daily, and is often read in Salon and dozens of other internet news aggregators.

Don was inducted into the Broadcasters Hall of Fame in 2008 and into the National Academy of Television Arts and Sciences Silver Circle. He was named the Reverend Dr. Martin Luther King, Jr. Humanitarian of the Year, and honored by B’nai Brith with the Great American Traditions award. In 2010 he was named Distinguished Minnesotan, an honor he shares with other luminaries such as Sigurd Olson and Will Steger.

Don’s reporting has taken him around the globe from Romania to Egypt, Venezuela, Australia and the Arctic Circle. He originated the I-team concept of investigative reporting and served on the board of directors of Investigative Reporters and Editors (IRE), the county’s preeminent investigative journalism organization.

He has served as a war correspondent covering conflicts ranging from the Yom Kippur War in 1973 to the war in Iraq in 2009. Major General Richard Nash, commander of forces in the southern half of Iraq called Don, “…our Ernie Pyle,” referring to the noted combat correspondent of World War II.

Don is the author of The Season Never Ends, a collection of stories about teamwork. It is currently ranked as the #2 best seller in the coaching section of Amazon.com. He is in the middle of writing his second book on the developing failure of American journalism to meet the needs of voting citizens in a democracy.

Don is an avid outdoorsman and primitive survival specialists. He spends much of his free time climbing ice falls, mountains, hiking and canoeing his beloved BWCAW. He has a wife and three grown daughters.

Customized Program
Because Don has interviewed thousands of people over the years, he is Excellent at customizing a program that is right on target for your goals. He will weave interesting stories into his program tailored for your organization.

Journalism Today
The role of the citizen and the news media. The changing nature of news, how it is provided and how it is used. The changing expectations of citizens. What is news. Why is it important. How is journalism failing the democracy and why.

Global Warming and Climate Change – Environment and Energy
The state of the science, the role of the citizen to be informed. How we draw our conclusions from the science. What are the prospects. Is there anything we can do. Why some individuals and groups are opposed to the revealed science. Plain language drawn from years of science research. Making global warming and climate change understandable to the average person. Message can change based on the depth of understanding by the audience. Has lectured to citizens’ groups and science academics. The expertise arises from 15 years as a science and environmental reporter, bringing the techniques of investigative journalism to the coverage.

Teamwork and teambuilding
As the author of The Season Never Ends, Don is asked to speak frequently on effective teambuilding and the lessons drawn from actual team play and how those lessons can be applied to business, family and social paradigms.

"Don Shelby was a huge hit as a keynote speaker at our Technology Expo. His insight and stories about teamwork on the basketball court and in life were a perfect unifying message for our Expo attendees. When surveyed later about the event, attendee response was immediate and unanimous: Don Shelby was an excellent speaker!" Scott Tronson, Marketing Manager Alpha Video & Audio, Inc.

"Your keynote speech was passionate, engaging and entertaining! The heart-felt, real-life stories you shared grabbed the attention of all 400 people in the room and generated feelings of inspiration and empowerment. Your use of humor mixed with insightful, moral lessons demonstrates how well you know your audience and exemplifies the level of professionalism you bring to any event. We couldn’t have asked for a more amazing and genuine speaker!" - Sandy Massel, Director of Campus Engagement, University of Minnesota Alumni Association

“Don Shelby had a wonderful message for all ages in his keynote presentation, as he addressed the audience at our Senior Expo this past spring. His personal stories were real and motivating. We had a full house and Don had the entire audience captivated. He was so well spoken and his passions were reflected in his speech. Don made such an impact that we heard many compliments and positive feedback for weeks after the event.” - Tricia Stenberg, Convention Sales & Marketing Specialist, Verizon Wireless Center

"Don Shelby is extremely knowledgeable on a number of subjects and a fabulous storyteller. He is passionate about climate and energy issues and can explain the issues in an understandable way with any audience that leaves people inspired and motivated to get involved. He is extremely warm, social and engaging." - Nicole Rom, Executive Director, Will Steger Foundation

As a meeting planner who has been in the business for over 20 years I can honestly say that working with you as an emcee was not only a pleasure but substantially enhanced the quality of the program. Your interest and involvement in the planning process helped make working with a national presenter seamless. Additionally, your great rapport with the audience was obvious, lending humor when possible, gravitas when appropriate. - Cookie Coleman, Coleman Mason Events