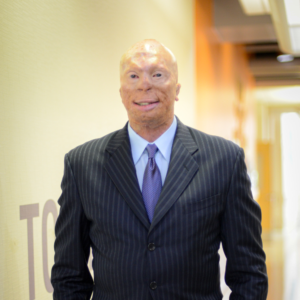 After serving four years in the Air Force, at the age 26, Jason achieved his goal to work on the streets of Phoenix as a rookie police officer. Then, only 14 months into his career, Jason’s life took an unexpected tragic turn. On the night of March 26th, 2001, a taxi cab crashed into the rear of Jason’s patrol car. Upon impact, Jason’s car burst into flames, trapping him inside.Through a series of miraculous and fateful circumstances, Jason survived the crash and ensuing physical and emotional catastrophe. He suffered severe burns to over 40% of his body which drastically altered his appearance. He has undergone more than 50 surgeries just to have the ability to accomplish simple daily tasks we often take for granted.Jason’s journey chronicles his fight for life, his triumph over tragedy and the inspiration that enables him to continue to overcome unimaginable adversity. His personal narrative exemplifies that the power of the human spirit can never be underestimated or extinguished.

Burning Shield
Overcoming adversity, life change, the power of love, the human spirit, accountability, and being the best version of yourself.

"Jason has a motivating message of Hope and Encouragement which is highly inspirational. He has turned his personal adversity into an opportunity to help other people in life who may be dealing with difficult circumstances." - Jimmy Walker, businessman, philanthropist and founder of Celebrity Fight Night.

"I wanted to take a moment to thank you for speaking at the Raytheon Missile Systems (RMS) leadership forum. Your personal story truly embodies turning challenge into great opportunity. Your public speaking skills and your ability to connect with the audience are best in class. I continue to receive emails from RMS employees, who want to express their sincere gratitude for having had the opportunity to hear your story." - Dr. Taylor Lawrence, President, Raytheon Missile Systems

"As an organization facing institutional change and disruption, Jason’s message of hope and perseverance was clear, transparent, and absolutely timely. Jason delivered one of the most moving and impactful presentations I have ever witnessed, his message was precisely what were looking for! I would recommend Jason Schechterle as a keynote speaker to any organization. Jason held the attention of our entire team for almost an hour, before taking numerous questions from the attendees, the room went silent as each teammate listened intently to this message. Perhaps more important than being a well-rehearsed speaker, Jason he is a true gentleman and will be a friend of our team for years to come." - Kevin Corwin Pacific Life RSD

"The most influential speaker I've ever heard. Thank you Jason for keeping us grounded in what really matters." - Helen Irving, President & CEO LiveOnNY

“​Jason was the keynote presenter at the American Association of Tissue Banks’ Annual Meeting. From the moment he stepped on stage, he was engaging, engrossing, and very entertaining. He has a gift for public speaking and I would not hesitate to recommend him to any group who is looking for a keynote or motivational speaker. Not only was he extremely professional, but he was a pleasure to work with during the planning process.” - Jennifer S. KellerVP, Professional Development, American Association of Tissue Banks