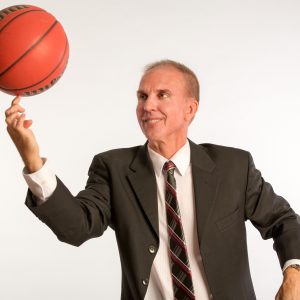 Coach Jim Johnson’s mantra, “dreams really do come true,” came to life Feb. 15, 2006, as the bleachers of Greece Athena High School exploded into cheers after Johnson called in number 52, Jason McElwain, to the final game of the season. Jason — A.K.A., J-Mac — was a student at Greece Athena High School who had a burning passion for basketball, but because of his autism, he had never been able to play. Throughout Jason’s high school career, he tried out for multiple sports teams but never made the cut. But things started to change for Jason when he met Coach Johnson. A coach of numerous high school teams for more than 33 years, Johnson saw Jason’s passion but was unable to land him a spot on his team. Instead, he appointed Jason team manager, a role he gladly accepted. Johnson knew this would be Jason’s best chance to be a part of the sport he loved so much.

The game was against Spencerport, a bitter rival, and with four minutes left in the last period, Johnson stood up and pointed at Jason to sub in. The entire crowd erupted in jubilant cries as Jason stepped onto the court. And, to everyone’s surprise, Jason scored 20 points, eighteen of which were three-point range, leading Greece Athena to the division title. The fans proceeded to rush from the bleachers onto the court, lifting Jason up in celebration. Johnson could only stand and watch in awe as Jason embraced his moment of glory, realizing his dream had finally come true. This inspirational story was awarded the national ESPY by the ESPN Sports Network.

Today, Johnson is a sought-after keynote and workshop speaker who shares not only the amazing story and his remarkable journey with Jason, he shares valuable leadership lessons with audiences all over the country. He is also the author of the book “A Coach and a Miracle: Life Lessons from a Man Who Believed in an Autistic Boy.”

DREAMS REALLY DO COME TRUE - KEYNOTE
Coach Johnson lived one of the most inspiring and heart-warming stories of the 21st century. He shares his six essential keys: Passion, Mission, Coal Setting, Perseverance, Carpe Diem, and Teamwork to help each audience member make their own dreams come true.

LEADERSHIP LESSONS FROM HALF-COURT - KEYNOTE
Using the remarkable story of J-Mac, Coach Johnson shares his six leadership keys that have guided his teams to immense success. The lessons in this presentation will help you become an extraordinary leader by learning to clarify your vision, build trust, create an edge, communicate effectively and lead by example and leave a profit.