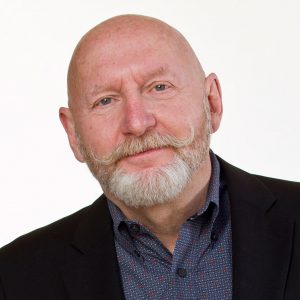 Larry Winget is a bestselling author, television personality, social commentator and internationally acclaimed speaker. He has hosted his own television series on A&E, been featured in two CNBC specials, had his own PBS special and is a regular contributor on FOX News, FOX
Business and other news networks as a personal development/
business/personal finance/parenting guru. He has appeared on Dr. Phil, The Today Show, Larry King Live and in three national television commercials.

He has also written six New York Times/Wall Street Journal bestsellers that have been translated into over 20 languages including Shut Up, Stop Whining And Get A Life, You’re Broke Because You Want To Be, It’s Called Work For A Reason, People Are Idiots and I Can Prove It, Your Kids Are Your Own Fault and Grow A Pair. His newest book is, What’s Wrong With Damn Near Everything: How The Collapse Of Core Values Is Destroying Us And How To Fix It. He is the co-host and founder of the fastest growing podcast for men in the country, the How To Be A Real Man Podcast. Larry is a member of the International Speaker Hall Of Fame and has spoken to over 400 of the Fortune 500 companies.

Larry is the best combination of credible content backed up with his bestselling books and over twenty years of experience speaking to nearly 400 or the Fortune 500 companies. He is the trademarked Pitbull of Personal Development® and is known worldwide for being direct, caustic, irreverent and in-your-face! He offers solid advice for improving your life, business, finances and family. Not often do you find someone who can bing solid information delivered in such a humorous, thought-provoking, transformational style.