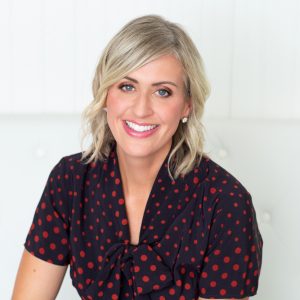 Lindsey Seavert is an Emmy, Edward R. Murrow, and Alfred I. duPont award-winning journalist and documentary filmmaker fueled by a calling to bring untold stories to light.

The legacy of teaching in her family inspires Lindsey to use stories as a vehicle to empower, educate, create empathy and spark systemic change. Her parents were Minnesota public school teachers who gave her the gift of curiosity, so with a book and pencil often in hand, she began writing as a young child, and hasn't stopped since.

She worked as a reporter at five news stations stretching from Northern Minnesota, Nevada, and Ohio before coming home to the Twin Cities and working as a reporter at WCCO-TV and KARE-11 TV.
In 2020, Lindsey moved to a freelance journalist and filmmaking role after releasing her first award-winning documentary, Love Them First.

The feature-length documentary, created at KARE 11, features a courageous Minneapolis principal fighting to get her students off the list of ‘failing’ schools while grappling with Minnesota’s vast achievement gap between Black and White students.

Love Them First has received hundreds of screening requests from school districts across the country and continues to change the conversation among educators when it comes to racial inequities in schools, the injustices of standardized testing and the best practices to teach children experiencing high levels of stress and trauma.

The film, which received one of journalism’s highest honors with the 2020 Alfred I. duPont award, has been applied into collegiate educational curriculum, featured at national education conferences and utilized at countless education staff development workshops.

The impact is only beginning, and Lindsey hopes to continue this advocacy, raising consciousness about the intersection of race and education, as she explores future film projects. Her work often focuses on women, families and children in underrepresented communities. Much of her inspiration comes from her late father, who spent his career advocating for teachers.

Lindsey is dedicated to mentoring young journalists and volunteering in the Twin Cities community. Her hobbies include running, fitness and creative writing.

The greatest chapters of her own story feature her family, her husband Ian, her son Stellan and daughter, Phoebe. They live in southwest Minneapolis.

Q&A Love Them First, Top 5 Things I Learned from Lucy Laney Elementary, and Moms in Media

Thank you so much for coming on the other night to share your story behind "Love Them First." I thoroughly enjoyed speaking with you and I know the attendees at the conference felt honored to have you with us.
The feedback we've received so far on the documentary include words such as phenomenal, amazing, life-changing, and "the best documentary I've ever seen."
Thank you so much for creating this masterpiece. - The Trauma-informed Educators Conference

It was such a pleasure to share your film with the Erikson community. It is incredibly moving and galvanizing. We’ve already heard from parents and teachers who are planning to share it with their school administrators.
I can’t thank you enough for your generosity and vision. Thanks for making the trek to Chicago and giving us such a beautiful piece of art to share with our community. -Erikson Institute, Chicago

I have attended an NPPA Women in Photojournalism conference in Dallas back in November 2019 where Lindsey Seavert has done a presentation on the documentary. I was totally mind-blown, and one of my first thoughts was: "I hope we can organize a screening at our station in Madison, and have Lindsey attend for Q&A." There are so many valuable lessons to learn - production, education, trauma, race issues, community building, creating a positive accepting culture.. Everyone needs to see this. - Member of National Press Photographer’s Association