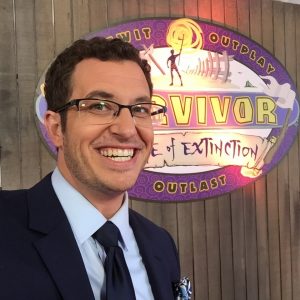 Rick Devens is best known as the 4th place finisher and fan favorite on ‘Survivor: Edge Of Extinction.’

Devens is a husband, and dad to a son, a daughter, a rescue dog, and two rescue cats. He’s spent the last 13 years as On-Air talent in local news meeting celebrities, politicians, and business leaders as well as victims, criminals, and the underserved.

Devens uses his famous sense of humor and his experiences with life and his time on ‘Survivor’ to inspire organizations.

His presentation addresses teamwork, leadership principles, changing the ways we approach challenges, and the importance of self-actualization and never giving up.

Devens is the son of a teacher and an Airborne Army Ranger. He grew up an Army brat, living all over the country. Moving from school to school, Devens developed his sense of humor and ability to create strong bonds quickly. Heavily involved in sports, Devens never found the success of his two older sisters but did learn how to lose. I’m fact, Devens learned almost as much from 2 years failing as a wrestler as he did from his incredible success as a Nationally ranked high school speaker.

After graduating from Virginia Tech in 2006, Devens accepted a TV job in Macon, GA. He met a Georgia girl, Becca. He married her and now they have two Georgia kids, Jack (5) and Juliet (4). Devens and his family are animal lovers and currently have 3 rescue pets.

Devens is very involved with local organizations in Middle Georgia. He especially enjoys working with ‘All About Animals Rescue,’ ‘The Macon Museum Of Arts & Sciences,’ and received the adapted sports ‘Aspire’ award for his work with the Houston County Sharks adapted sports program.

HUNGRY, TIRED, DIRTY, AND LIVING THE DREAM! THE POWER OF A POSITIVE ATTITUDE
After weeks of competing on ‘Survivor,’ Rick Devens was starving, stinking, and alone. He was also having the time of his life! This presentation explores the power of positive thinking. Devens looks at ways to create a fun, fulfilling work environment no matter where you are or what you are doing.

WIN YOUR WAY! BELIEVING IS THE FIRST STEP TO SUCCEEDING
Voted out 4th on ‘Survivor,’ Rick Devens won his way back into the game and took control. Devens, and his self-proclaimed dad-bod, went on to win 4 individual challenges (twice as many as any other castaway) and would go on to play more hidden immunity idols than any castaway in the 38 season history of the game. Now he shares his story and how beginning to believe in himself changed everything.

BUILDING A SHELTER BUILDING A TEAM
Shelter or water? The decisions come fast and hard in the game of ‘Survivor.’ Bumps in the road can bring a tribe together or tear them apart. Rick Devens uses his tribes’ triumphs and comic blunders to explore how your workplace can operate more cohesively.

Rick’s motivational talk to our sales team was tremendous; every account manager was saying how inspirational his story is, how well he told it, and how he incorporated our message of persistence and grit into it perfectly.

And our group is not an easy one to win over! While we all are nice people, we also are veteran salespeople all with 20+ years of experience under our belts, so we have sat through numerous motivational speakers in similar sales meetings over the years. And while all those speakers had good intentions and many with good ideas, they were frankly dull or not relatable.

But the fact Rick actually lived, practiced, acted-on his motivational thoughts under extreme physical and psychological conditions, and that Rick has proof! We can actually see his wins and growth unfold. It is what makes your story much more compelling.
- Christopher D' Ablemont, Network Sales Account Manager, Sinclair Broadcast

Whoever thought a “Reality Show” would provide inspiration for a sales meeting!

As a fan of the show “Survivor” I watched Rick Devens play the game better than most that have ever stepped onto “Survivor”. Rick played Survivor with a savvy mix of people skills, personality, dogged perseverance and an ability to recognize a fluid situation and shift strategy on a dime. These qualities lead him to a fantastic run during Survivor but as he spoke to us, I came to realize these critical talents are highly transferrable to any business environment. As a television anchor Rick’s ability to connect with his audience easily enabled him to quickly engage my team from the first slide of his presentation to the last. He was able relate to them in a smooth and comfortable style the stories and events surrounding the taping of Survivor and their effect on him during the game. Most important, the parallels he drew from the life lessons he learned from his time on Survivor to the real world of a business environment were thought provoking, insightful and often amusing!

Rick Devens spoke at a recent gathering of our District leaders, and I would definitely encourage others to bring him in for an engagement. Rick’s experiences as both a local news anchor and a participant on Survivor allow him to fully engage with any audience in a very genuine way. As anyone who’s seen him in either capacity can attest, Rick has a sharp wit and sense of humor that serve him well as a speaker.

Further, Rick was positive and motivational in his address to my administrators. Despite not coming from an education background, he was able to connect his intriguing experiences to the world of education in a way that was valuable for my team.
- Dr. Curtis Jones, Superintendent - 2019 National Superintendent of the Year, Bibb County School District